Cars 3 Driven to Win is a new game for the PS3 and PS4 as well as the XBOX One and XBOX 360. My kids have always loved Cars, so they were really excited to try out the game. 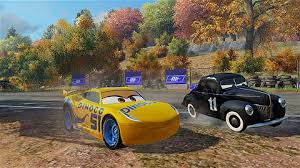 The race is on! Journey beyond the film and experience an all-new adventure as Lightning McQueen, Cruz Ramirez, Jackson Storm and other beloved characters! Master racing skills, mid-air tricks and combat techniques to prove you have what it takes to become the ULTIMATE CHAMPION in Cars 3: Driven to Win! Available NOW!

Start your engines and gear up for the ultimate racing experience in the all new video game, Cars 3: Driven to Win inspired by Disney•Pixar’s film, Cars 3. Play with over 20 customizable characters including Lightning McQueen, Jackson Storm, Cruz Ramirez and the next generation of racers in over 20 tracks set in iconic locations from the film such as Radiator Springs. Train and advance your abilities in 6 game modes and challenge your family and friends in the Battle Race to become the Ultimate Champion. On the road to becoming a Hall of Fame Driver, training and skill will give you an edge in a race that anyone can win.

My boys LOVE this game! They say it's like a kids version of Need for Speed. I love that they can play a racing game made just for kids!

Giveaway! One winner is going to get a code for the full version of the game on any of the available systems. Enter below, and good luck!


Disclosure: I received one or more of the products mentioned in this post to help facilitate my review. All opinions are mine and I was not influenced in any way. Please contact Paige@7kidsandus.com with any questions.
at 7:56 PM