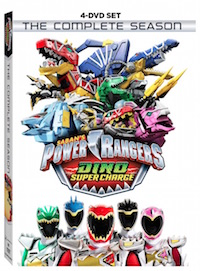 Catch all of the dino-charged adventures when Nickelodeon’s iconic, 23-years-running “Power Rangers” TV series returns with Power Rangers Dino Super Charge: The Complete Season, arriving on DVD and Digital HD on June 27 from Lionsgate. The Power Rangers must battle an evil intergalactic villain in this action-packed franchise that remains one of the top-rated and longest-running children’s live-action series in TV history. Including four discs with over four hours of action, the Power Rangers Dino Super Charge: The Complete Season DVD will be available for the suggested retail price of $19.98.

The Power Rangers continue their search for the Energems after Sledge’s defeat, but soon learn that his most dangerous prisoner, the evil Heckyl, survived! In light of this new threat, Kendall creates a powerful new Dino Charger that unlocks the Red Ranger’s T-Rex Super Charge mode! It will take every Zord, Megazord, and Dino Charger in the Power Rangers’ arsenal to finally unite all ten Energems and save the universe!


Disclosure: I received one or more of the products mentioned in this post to help facilitate my review. All opinions are mine and I was not influenced in any way. Please contact Paige@7kidsandus.com with any questions.
at 8:25 AM