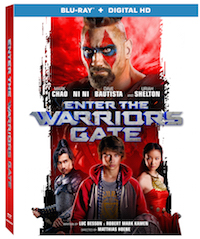 Reach the next level when the family action-adventure film Enter the Warriors Gate arrives on Blu-ray™ (plus Digital HD) and DVD June 6 from Lionsgate. Follow the journey of a teenage gamer who is magically transported to an ancient kingdom and must transform his video game skills into those of a Kung Fu warrior to battle the empire’s tyrannical ruler. The film’s all-star cast includes Mark Chao, Ni Ni, former WWE Superstar Dave Bautista, Sienna Guillory, and Uriah Shelton. Written by Luc Besson (The Fifth Element and the upcoming Valerian and the City of a Thousand Planets) andRobert Mark Kamen (The Karate Kid), the Enter the Warriors Gate Blu-ray and DVD will be available for the suggested retail price of $24.99 and $19.98, respectively.

Disclosure: I received one or more of the products mentioned in this post to help facilitate my review. All opinions are mine and I was not influenced in any way. Please contact Paige@7kidsandus.com with any questions.
at 2:10 AM