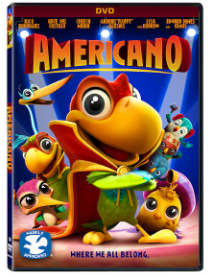 Get ready for a south-of-the-border journey, when the animated adventure Americano arrives on DVD, Digital HD and On Demand on June 13th from Lionsgate. Awarded the Dove Family Seal of Approval, Americano tells the charming tale of a colorful Mexican parrot named Cuco who sets off on an adventure to defend his family. Available in both English and Spanish, the film features the voices of Rico Rodriguez, Kate Del Castillo, Cheech Marin, Gabriel “Fluffy” Iglesias, Golden Globe® nominee Lisa Kudrow (Best Supporting Actress, Television, “Friends”), and Academy Award® nominee Edward James Olmos (Best Supporting Actor, Stand and Deliver, 1988), in addition to radio personalities Don Cheto, El Mandril, and Argelia Atilano. The AmericanoDVD will be available for the suggested retail price of $14.98.

isclosure: I received one or more of the products mentioned in this post to help facilitate my review. All opinions are mine and I was not influenced in any way. Please contact Paige@7kidsandus.com with any questions.
at 2:19 AM