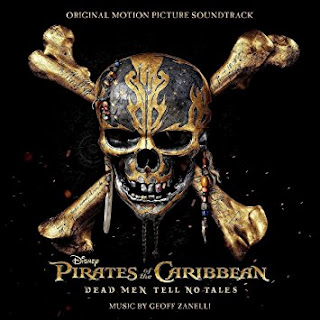 The Pirates of the Caribbean: Dead Men Tell No Tales Original Motion Picture Soundtrack physical and digital soundtrack is set for release from Walt Disney Records on May 26, 2017, the same day the film opens in U.S. theaters.  As with the previous "Pirates of the Caribbean" films, and with a nod to its swashbuckling predecessors in the genre, music plays a integral role in "Dead Men Tell No Tales," which features a score by Emmy®-winning composer Geoff Zanelli with melodies filled with excitement and intrigue as befits the pirates' latest journey.


Also available digitally is the bonus track  "He's a Pirate" by Hans Zimmer vs. Dimitri Vegas & Like Mike.  The original theme was introduced in "The Curse of the Black Pearl" by Oscar®-winning composer Hans Zimmer ("Interstellar," "The Dark Knight," "The Lion King") and has been re-recorded by Belgian DJ and music producer duo Dimitri Vegas & Like Mike, who recently had two No. 1 hits on Billboard's Dance Club Songs chart.
The Pirates of the Caribbean: Dead Men Tell No Tales Original Motion Picture Soundtrack will be available wherever music is sold on May 26, 2017 HERE and HERE.


Disclosure: I received one or more of the products mentioned in this post to help facilitate my review. All opinions are mine and I was not influenced in any way. Please contact Paige@7kidsandus.com with any questions.
at 2:38 AM