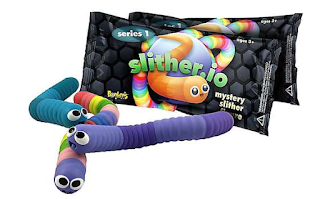 My kids have always liked games they can play online. They usually hear about them from vloggers they follow. A year or so ago when Riley saw a vlogger playing Slither.io he ran in my room and went to try it out himself.

Riley was hooked on the game almost instantly. He played it whenever he had free time, and even make his own vlogs about it!

Recently, I was sent a few of the Slither.io mystery packs to review, and Riley was SO excited! He had no idea anything Slither.io existed! He tore into the packs and was thrilled to get 3 different colors! He placed them on his desk, and now really wants to collect them all.

You can purchase your own mystery packs at Walmart for about $8.99 each! Bonkers Toys is also introducing several other Slither.io toys, so keep an eye out on their facebook page for more info.

Slither.io has been played more than 180,000,000 times just in December 2016, you read right, more than a hundred eighty million times!

Disclosure: I received one or more of the products mentioned in this post to help facilitate my review. All opinions are mine and I was not influenced in any way. Please contact Paige@7kidsandus.com with any questions.
at 1:44 PM