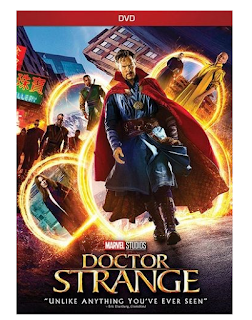 Doctor StrangeAfter a car accident leaves him with nerve damage that ends his career as a New York neurosurgeon, Stephen Strange (Benedict Cumberbatch) travels to Kathmandu in the hope of finding an otherworldly cure for his injuries. There, a powerful mystic known as the Ancient One (Tilda Swinton) accepts him as her pupil and trains him in the art of sorcery. Eventually, Strange must use his new powers to stop a rival (Mads Mikkelsen) from causing chaos by accessing the Dark Dimension. Rachel McAdams, Chiwetel Ejiofor, and Benedict Wong co-star in this entry in the Marvel Cinematic Universe. Directed by Scott Derrickson (Sinister). ~ Jack Rodgers, Rovi

Disclosure: I received one or more of the products mentioned in this post to help facilitate my review. All opinions are mine and I was not influenced in any way. Please contact Paige@7kidsandus.com with any questions.
at 9:50 AM