Living in the Age of Airplanes 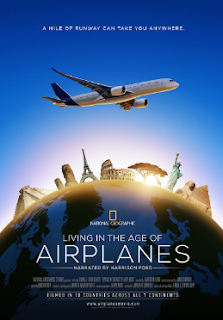 Living in the Age of Airplanes offers a fresh perspective on a modern-day miracle that many of us take for granted: flying. Narrated by Harrison Ford and featuring an original score from Academy Award winning composer James Horner, the film takes viewers to 18 countries across all seven continents to to illuminate how airplanes have empowered a century of global connectedness our ancestors could never have imagined. Following its premiere at the Smithsonian National Air & Space Museum in Washington, DC, the film continued its successful run on giant screen, digital, IMAX and museum cinemas worldwide in 2015/2016. Now Available  digitally and on DVD/Blu-ray, along with the release of the soundtrack. You can find on Amazon, the films website here and on iTunes.

Disclosure: I received one or more of the products mentioned in this post to help facilitate my review. All opinions are mine and I was not influenced in any way. Please contact Paige@7kidsandus.com with any questions.
at 2:06 PM