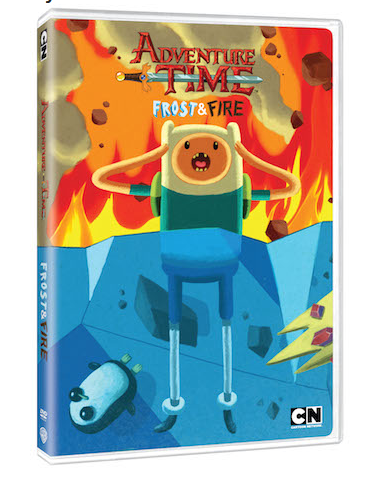 Things are heating up as Flame Princess and Ice King battle it out in the latest AdventureTime DVD release Adventure Time: Frost & Fire! Finn may be in over his head, but don’t worry, it’s not all fire and ice because this DVD is packed with 16 popular episodes with everyone's favorite characters from the Land of Ooo! Available on March 3 for the suggested retail price of $19.82, fans will be able to get their hands on nearly three hours of hot and icy content, with 16 popular episodes from the award-winning series, including:
1.     Frost & Fire
2.     Earth & Water
3.     Jake the Brick
4.     The Prince Who Wanted Everything
5.     Something Big
6.     Return to the Nightosphere
7.     Daddy’s Little Monster
8.     Joshua and Margaret Investigations
9.     Davey
10.    The Pit
11.    Freak City
12.    Memories of Boom Boom Mountain
13.    James
14.    Time Sandwich
15.    Apple Thief
16.    Thanks for the Crabapples, Giuseppe

Created by Pendleton Ward, the Adventure Time television series is an original animated comedy from Cartoon Network that follows the everyday adventures of unlikely heroes Finn the Human and his best friend, the shape-shifting dog Jake, as they travel across the Land of Ooo and encounter its unique inhabitants. Whether it’s saving Princess Bubblegum, defeating zombie candy, mocking the “oxy-moronic” Ice King, or rocking out with undead music wiz Marceline the Vampire Queen, with Finn & Jake it’s always Adventure Time! New episodes of the Emmy® Award-nominated series debut on Cartoon Network on Thursdays at 7:30 p.m. (ET, PT) with re-airs throughout 2015.

My boys LOVE Adventure Time, and they said this DVD was awesome, and they love how many episodes are included!

Disclosure: I received one or more of the products mentioned in this post to help facilitate my review. All opinions are mine and I was not influenced in any way. Please contact Paige@7kidsandus.com with any questions.
at 5:01 PM