Being a mom of 5 I would for sure not call my self normal and you could say I was a little "insane" for having so many kids but come to find out I am not alone. A fun way to express myself is through a new line of fun Insanimals, which are crazy animals that did some things that well just made them insane, but they are now loved for there uniqueness by others.

Meet the animals of Insanimals: 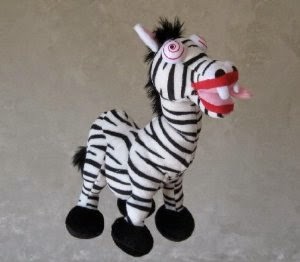 Zany Zed-A fun loving zebra who once lived in Africa. During the summer months it became hard for Zed to find food, so he ended up eating Bongo Berries which transformed Zed into a bright red lipped, crazy eyed zebra. Which not only did the Bongo Berries transform his appearance it also made him well a little zany. Hence how he became Zany Zed, who walks along on his hind legs like a human and sometimes claims he is a horse in disguise. 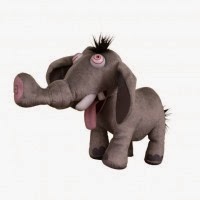 Eager Eddie-A elephant which was always wanting to go go go. He would blow his trunk like a trumpet to get the others to follow, he loved to blow his trunk so much that he wanted to be a musician. One day while Eddie was practicing a mouse came and sat on his head. Well most know that Elephants are deathly afraid of mice because they can run up their nose. So Eddie began to swing at the mouse to try and get it off his head, while trying to remove the mouse he tied his nose up in a knot! Now poor Eddie tried to blow his trunk, he blew so hard that his eyes popped out and red circles appeared! Eddy was so Eager to get the mouse off that he lost his trumpet like sound to what now sounded like a kazoo. This is how Eddie became known to others as Eager Eddie. 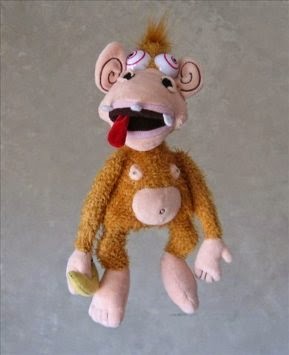 Freddie Flungpu- Freddie a monkey from India, would carry around a banana and suck on it like a baby bottle. His friends would laugh, so Freddie ran away to the circus. Freddie became a hit with the circus, he could do high wire walks, ride the backs of ponies and swing across the big tent! But being a monkey sometimes Freddie would snatch the viewers popcorn and then throw things at the crowds! This is how he got his name Flungpu Freddie. The ringleader tried to hypnotize Freddie so he would no longer act this way but all the hypnotism did was make his eyes pop out and turn bright red.

Goofy Gilbert-Like Zany Zed is also from Africa. Gilbert was not like the other giraffes instead of using his neck to eat tree leaves he would perffer to eat the grass, wild berries, tree bark, bugs and more from the ground. His friends thought he was a bit, well, goofy. This is how he became Goofy Gilbert. Gilbert wasn't all that smart that he went looking for food in the tribal land. This was a goofy idea, as Gilbert got close he ducked his long neck down into a simmering pot of stew. One of the tribe members thought that Gilbert would make a great meal and shot him in the rear with a poison arrow. Gilbert somehow managed to survive but became even more goofier, with red circles eyes and a awkward walk.

Loco Louie- A cute chihuahua from Mexico who spent every day foraging for his favorite food, hot chili sauce. Skittish and wary of strangers, Louie would bounce around town to town digging through garbage cans eating anything and everything which had a trace of chili sauce. Louie would make a big mess and one restaurant owner had, had enough. The owner of the restaurant wanted to teach Louie a lesson so he gave Louie a bottle of sauce made from the hottest pepper known to a dog, Ghost Chili. Louie loving chili sauce so much ate it up and within seconds he could feel the burn in his body and the fire on his tongue, he began to have smoke come out his ears! Next thing you know his eyes popped out big and wide, and red circles appeared on his eyeballs, he went mad looking for something just to take away the burn. They say that the Ghost Chili Hot Sauce is so potent that "if it doesn't kill you, it makes you "loco forever", thus Loco Louie. 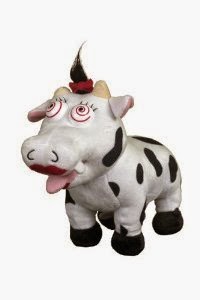 Nervous Nelly- Nervous Nelly comes from South Dakota farm. Nelly would moo over and over when the pigs would eat her food, or when someone would go cow tipping at night that she began to become so nervous she wouldn't sleep. Now that Nelly was not getting any sleep she would begin to think even more, when will the grass be green? when will the sun come up? when, what, how, why? Just a big mess of nerves. Nelly had a date coming up in the morning so before she went to rest she placed her hair in a nice bow and used the red paint from the barn as lipstick. The pigs had other ideas that night, just before Nelly began to doze off they snuck up beside her and tipped her over! This made things only worse for poor Nelly, she ended up missing her date and has never slept again, in worry of the pigs. This is how she became Nervous Nelly.
The line of 6 Insanimals is a great way to express ones self and teach to respect others, you can purchase your Insanimals by clicking here.

Disclosure: I received one or more of the products mentioned in this post to help facilitate my review. All opinions are mine and I was not influenced in any way. Please contact Paige@7kidsandus.com with any questions.
at 5:41 PM