How to See New York City on a Budget 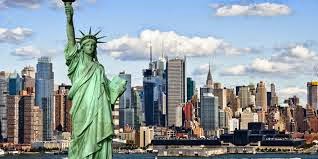 Every year, we take all the kids to New York. I know, it sounds expensive, but it really doesn't have to be if you know where to look. We love to have a good time, and we don't have a lot to spend after airfare and hotel, so I have compiled a list of some of my favorite inexpensive (some even free!) things to do in New York City.

8th Street Walking Tour:
And what exactly will you discover? How about the site of Jimi Hendrix's Electric Lady recording studio, Jack Kerouac's local haunts, and Edward Hopper's home? Gossip dished by guide Arthur Marks. This walking tour is not only educational, but you will see so many fun village locations. Great for kids and adults!

Chelsea Market:
The former home of the National Biscuit Company is a hot spot for foodies-in-training; favorite vendors include Jacques Torres, People's Pops and Ronnybrook Dairy. This is absolutely one of our favorite stops. We love places that don't require us to spend money, but if we do want to buy something, we can. We usually get lunch and a few treats for the kids.

Central Park Photography Classes:
While the kids and I love to walk around Central Park..each of us always has a camera in hand to get our own perspective. This class by JP Teaches Photo is something I love to do, because for $97 you get a 3 hour beginner course on photography, and you get to do it in one of the most beautiful parks in America! I like the idea that I am spending money on something on vacation, that will teach me a skill I can use at home..it's a win/win!

The Statue of Liberty: Lady Liberty—or Liberty Enlightening the World, as she’s officially known—was a gift from France on America’s 100th birthday. A universal symbol of freedom, the copper-plated sentinel stands 305 feet tall from the bottom of her base to the tip of her torch. The monument underwent renovations in 2011 (including new stairs and an elevator). Admission (including a super cool ferry ride!) is just $17 for adults, and $9 for children.

Brooklyn Botanic Garden:
Those searching for a little peace and quiet would do well to spend a few hours at this verdant oasis. The garden—which abuts two other neighborhood gems: the Brooklyn Museum and Prospect Park—was founded in 1910 and features thousands of types of flora, laid out over 52 acres. Each spring, crowds descend on the space for the Sakura Matsuri Festival, during which more than 70 trees bloom along the Cherry Esplanade. But equally impressive are serene spots like the Japanese Hill-and-Pond Garden, the first Japanese-inspired garden built in the U.S., and the Shakespeare Garden, brimming with plants (such as primrose and crocuses) mentioned in the Bard’s works. Start your journey at the Visitor’s Center, an eco-friendly portal (it has a green roof filled with 45,000 plants) that opened in May 2012. Admission is just $10 for adults, and kids 12 and under are FREE.

Disclosure: I received one or more of the products mentioned in this post to help facilitate my review. All opinions are mine and I was not influenced in any way. Please contact Paige@7kidsandus.com with any questions.
at 12:29 PM