IN A WORLD… where people love movies and stuff that’s really really funny, one game embarks on an epic quest to create the greatest laugh of all time. Galactic Sneeze presents: SCHMOVIE.

What would you call a HORROR FILM about an EVIL BOOGER? A SCI-FI about a GANGSTA LUNCH LADY? A ROMANTIC COMEDY about a CLUMSY PROCTOLOGIST?

Come up with funny titles for make believe movies based on a film genre (determined by the roll of a die), combined with an outlandish character (generated by flipping two cards). For example, what would you call an ACTION FILM about a KILLER SANDWICH? Players might write titles such as “Rye Hard”, “Stop or I’ll Prosciutto”, “You’re Toast” (starring Burnt Reynolds), or “Breadator”. Each round, a Schmovie Producer awards one of nineteen different golden Schquid Trophies for his or her favorite title. The first player to collect four Schquids wins! With an infinite number of potential Schmovie premises, the laughter never ends! 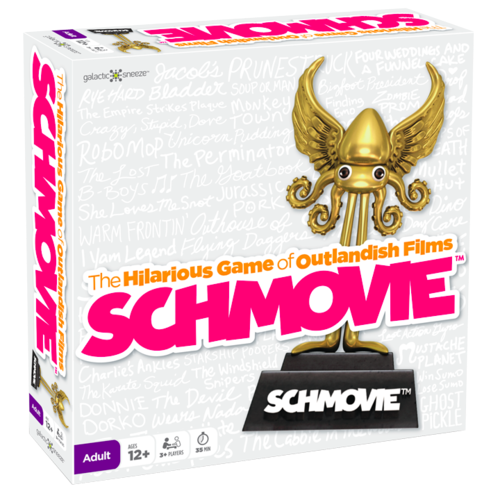 Schmovie is now hot off the press and available on Amazon, as well as select retailers nationwide. Ask your local toy/gift shop to stock it!

The kids and I played this game, and while it was a little hard for them, since they don't get the references very much..we still had a great time! I think this game would be really fun for a group of movie living adults.

Disclosure: I received one or more of the products mentioned in this post to help facilitate my review. All opinions are mine and I was not influenced in any way. Please contact Paige@7kidsandus.com with any questions.
at 2:09 PM