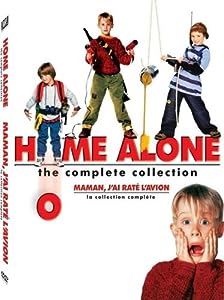 This Home Alone Complete Collection DVD set it just $11.99 and ships free with super saver shipping ($35+.)
Review for Home Alone:Now and forever a favorite among kids, this 1990 comedy written by John Hughes (The Breakfast Club) and directed by Chris Columbus (Mrs. Doubtfire) ushered Macaulay Culkin onto the screen as a troubled 8-year-old who doesn't comfortably mesh with his large family. He's forced to grow a little after being accidentally left behind when his folks and siblings fly off to Paris. A good-looking boy, Culkin lights up the screen during several funny sequences, the most famous of which finds him screaming for joy when he realizes he's unsupervised in his own house. A bit wooden with dialogue, the then-little star's voice could grate on the nerves (especially in long, wise-child passages of pure bromide), but he unquestionably carries the film. Billie Bird and John Candy show up as two of the interesting strangers Culkin's character meets. Joe Pesci and Daniel Stern are entertainingly cartoonish as thieves, but the ensuing violence once the little hero decides to keep them out of his house is over-the-top. --Tom Keogh
at 4:33 PM