My daughter is really bad about keeping hair ties or any type of hair device in her hair. Until now.

Elizabeth got a cute Ponytail Pal hair tie which is a cute brown teddy bear (or it could be a monkey) that is on the hair tie.  The Ponytail Pal is an "ouchless" hair tie making the tie easy to come off and not tangle the hair.

Elizabeth really likes the monkey as she calls it, which I am thinking the family is set on it being a monkey which fits her better anyway because she is an active child. I like having the Ponytail Pal because now every morning Elizabeth says "where is my monkey?" which makes getting her hair up so much easier because she really loves the idea of having a monkey in her hair. 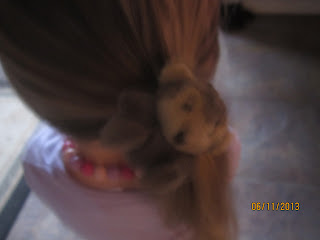 You can check out Ponytail Pals here, and see all the cool animals to choose from, there are 12 in all! I personally love the piggy, and Elizabeth also wants the pony (unicorn) they are cute and fun ways to make your daughter's hair pop! I love that I can pass them along to her younger sister once she has grown out of them.


Win a Ponytail Pal of your own. Just fill out the rafflecopter below, contest will end 6/24/13 open to U.S. residents only.

Disclosure: I was given a ponytail pal to help with my review. All opinions are 100% mine.
at 9:02 PM