Recently, Hasbro sent me this new game to review called Bejeweled Frenzy. Since I already LOVE to play the app of Bejeweled, I knew this game would be so much fun.

I decided to play the game with Xander even though he is JUST 8, I was hoping it wouldn't be too complicated for him.

It’s the card version of the addictive online Bejeweled game! Collapse matching cards and collect gems, and earn bonus points with Boost Gems! When the cards run out, count up points for each card stack and Boost Gem. Whoever has the highest score is the Bejeweled Frenzy winner!

Basically, both players start with a card, and draw more cards one at a time to add to their "row" of jewels, trying to make 3 in a row matches. If you match the first set of jewels you get to keep the little Boost Gem and get extra points at the end of the game. 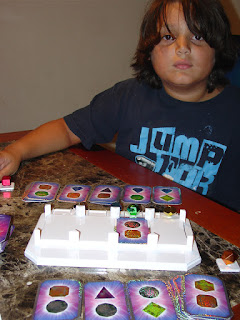 Although Xander doesn't look too happy here..he is DEEP in thought..I love that the game really made him think..you have to decide when you "collapse" your cards, which one to keep on top based on what other cards you have. Xander actually beat me both times we played, and is now going to be challenging his dad to a game.

One of my favorite things about the game is that it's only $14.99! You can purchase it at most major retail stores.

Disclosure: I was given a copy of Bejeweled Frenzy to help with my review. All opinions are mine.