Do your kids love Angry Birds? Do They Love Star Wars? Mine do! They were even more excited when they found out on my iPhone that Angry Birds and Star Wars had been combined into a really cool new game.

Then, one day at the store, they saw this. 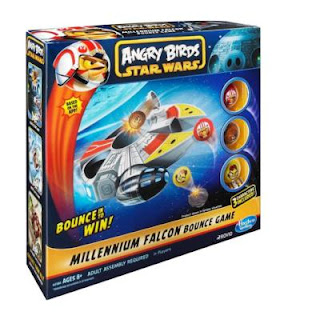 They were both so excited for it, they asked if Santa could bring it to them for Christmas. Of course, I already knew we were going to get the chance to review one!

When the game arrived in the mail, the boys were even more excited. I could hardly contain them as they opened the box and set it up (thank goodness for them being 6 and 8 and don't need much help now with setting up games!) 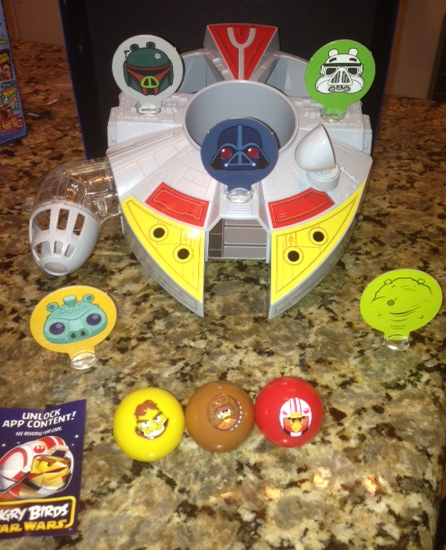 Basically, what you do in this game, is try to bounce the balls with the "Angry Birds" on them at the cardboard targets of "Pigs" and into the holes on the Millenium Falcon.

Xander and Riley played the game right away and had the balls bouncing everywhere! They were laughing and having a great time, they even brought out a bunch of their other Angry Birds toys and had a whole game going with all kinds of stuff going on.

Overall, they loved the game, and for $19.99 it's a great deal, especially because the Millenium Falcon can be played with on its own!

We also received Star Wars Angry Birds Foam Flyers which are basically characters like Luke Skywalker, Chewbacca, Darth Vader and a Storm Trooper that are small and light weight and fly through the air.

As you can seem Riley was really excited over his Storm Trooper. At just $9.99 these are so much fun!

One reader is going to win one of the toys shown above (randomly picked toy by a sponsor).
Please enter using the rafflecopter form below. Good Luck!

Disclosure: I received the toys shown in this post from Hasbro to help with my review. All thoughts and opinions are my own and I was not influenced in any way.


a Rafflecopter giveaway
at 9:17 AM