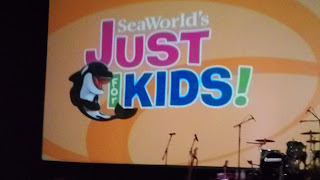 
Seaworld in Orlando Florida invited us to come and enjoy a day at Seaworld along with getting front row seats to their 4pm showing of Imagination Movers. My younger kids Joshua and Elizabeth were super happy and started to dance along with the show they had a blast watching one of their favorite shows LIVE! 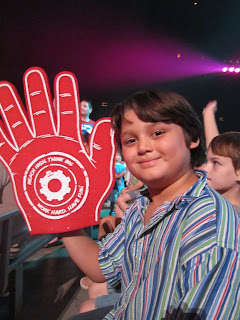 While at the show the Imagination Movers threw out big foam hands and Xander caught one! Smitty also gave Xander a guitar pick! How cool, along with the show they had a pre show of Chinese Performers which first set was a all girl team with hula hoops second was all boys with hats!


Along with Imagination Movers they will have the following shows coming during the month of January and Feb the 1st week.

Laurie Berkner who most kids will recognize from Nickelodeon, and Nick Jr she sings and plays guitar. She comes to Sea World January 19th

Choo Choo Soul with Genevieve a short that plays on Disney Channel and there newest channel Disney Jr. They come January 26th


On top of the show, Seaworld offers, lots of other awesomely fun activities for kids, they have a whole huge section called Happy Harbor. Happy Harbor has 6 rides that all ages can go on along with a mini Shamu roller coaster! I had season passes up to a few years ago and it was my first 2 sons first coaster this round Joshua was big enough. Here is his journey : )

Also now home to Franklin the Turtle from Nick Jr he will be at Seaworld along with Shamu for pics! 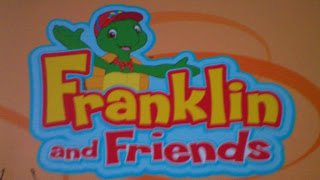 So if your planning to come to Orlando FL come check out the great weekend shows at Sea World that is all JUST FOR KIDS!