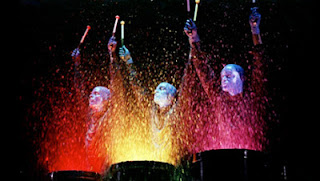 Looking for something different to do while in Orlando, Florida? Check out the Blueman Group! Blueman Group consists of 3 men that are completely covered in blue. The show is the 3 guys doing comedy acts along with making music of the most unusual things.

The beginning of the show you have what is like a tele-promter which you read to people in the audience. The one I liked best was they said "Sarah has a headache.. tell Sarah to close her eyes.. picture her headache as a cow.. then the cow is grazing in the field.. now kill the cow..sell the cows meat" etc.. it was very funny.

The Blueman Group come to the stage and start in with the picture above they kind of act like aliens! They don't blink or talk..just stare! Which weirds you out. (See picture below). Then they do the most crazy things, and some is even very gross. So if you have a weak stomach you might want to shield your eyes from some of it. There is also a "splash zone" which are the first 3 rows in the show. They even provide you with your own poncho so that you can stay dry......you only wish it was water.

The music part of it is very cool. They have tiki men up in 2 cages which play drums, keyboard and bass. They are dressed in neon so they look very cool but creepy jamming in their cages. The Blueman Group brings out all kinds of different types of piping which they beat on creating music. They add lights and colors to the pipes to make very neat special effects.

It's a interactive show! This means you don't know what will happen and you will be on camera at least once in the whole performance. They have many people which they choose from the audience that have different tasks they must do with the Blueman Group. The women in front of us had to go on stage and she was basically on a date with the Blueman Group I don't think she had any idea what was happening the whole time. 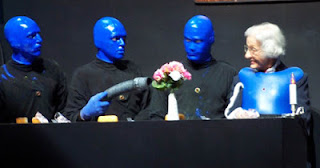 Do not be late or try to go to the restroom while watching the show they will make a scene of it and everyone will know that you're late or making a dash for a restroom. Also if you have seizures this is not something you should attend. They have many strobe lights which make the eyes go nuts. The music is very loud so they do not recommend the show for children under age 3. You can bring them, but this is your warning. 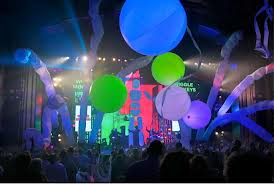 At the end of the show they have a dance party! Yes the whole place becomes an all out party which you don't know what is happening. They have huge balloons which are bouncing all over along with toilet paper cannons. You also learn the many many terms used for your butt : )

I loved this show and would recommend that everyone sees the Blueman Group at least once in their lifetime because its something you will not forget!

Disclosure: I was given tickets to Blue Man Group to help with my review. All opinions are 100%
mine.