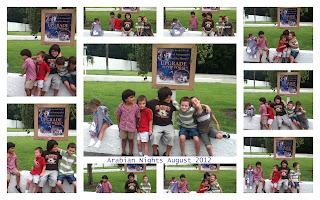 Parking was free, and the line for check in was not that bad we got there at about 7:10pm for an 8:30 showtime. We had the VIP experience which includes backstage tour, pictures of the kids on horses, guaranteed seating in rows 1-3 and drink upgrades to free wine and beer. 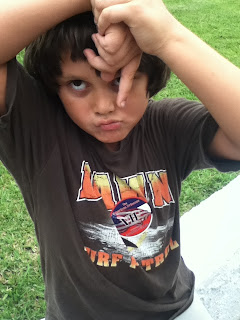 Upon entering they take your photo on a green screen (they insert their logo on it after the photo is taken) which is shown to you during dinner. and you have the chance to purchase at the price of  $20 for a 5x7 and 2 wallets or a full 8x10, or you can buy the whole package for $25.
Riley was making cross eyes in our picture, so we decided not to purchase, but they did offer us the chance to retake the photo after the show (didn't happen, kids were all way too hyper after to get them to stand still!)

After the picture you go through a small gift shop which had some neat stuff but we didn't really look because well 7 kids all wanting something gets pricy.

Once we were out of the gift shop we were in the grand room which has a nice pre-show of a belly dancer who interacts with the guests getting them to come up and learn some moves.

Also in the grand room they have an appetizer of chips and salsa along with a cold pasta salad which was very good, it's buffet style so you can take your own.


Finally after about 30 minutes of being in the grand room we were able to get into where the dinner show will take place. If you're a VIP or rows A-F you go in the first set of doors to your right, everyone else heads back so better for them to stay to the left. As VIP we went through the first set of doors into the main show which we then walked onto the floor which was a mulch like dirt to go get the pictures of the kids on the horse. 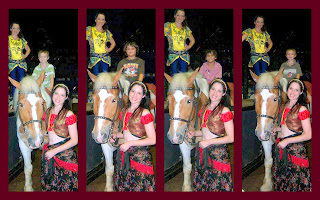 Elizabeth and Joshua would not cooperate so they did not get their picture on the horse but the rest did.

Then from the pictures we went to meet the cast and horses, while we were there we saw a woman who was painting the one horse with hearts and tribal images for the show. 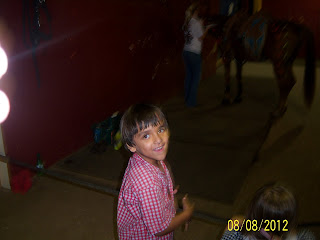 Then you could take a picture with another horse that they chosen to stand out, the rest of the horses were in their pen, they ask that you please do not pet the horses.. 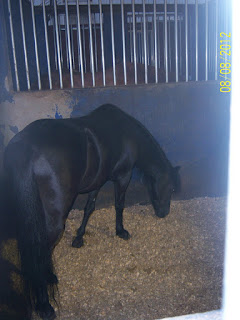 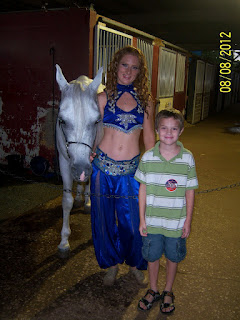 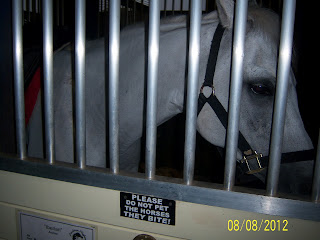 We left the meet and greet area and headed back to the main area which they had "horse races" going on. The kids got to take part of the "horse races" which was a stick horse and they played freeze tag. All kids can take part in this activity it was not for only VIP children. 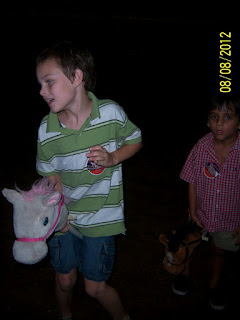 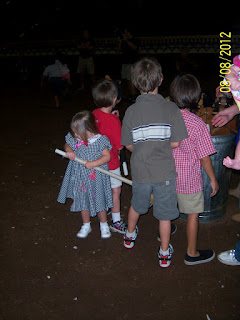 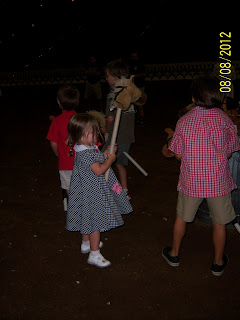 Finally after the horses and such we went to our seats, in the mean time I took Sarah to get a new diaper and use the restroom which was very clean. Since having Sarah I have a travel system, (stroller and baby carrier set) I was able to park the stroller by the door and carry the car seat to the table. When we sat I had placed Sarah the long way on the bench so that the carrier was facing me, that was a big mistake because it slipped off and she went flying under the table just missing her head getting hit : ( bad mommy so then Paige figured out that the best way is to place forward like how we sat, it fit perfect on the backside of car and table. 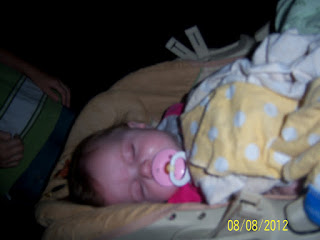 We had the almost the whole row until 3 people got stuck with us (Sorry about that!) so the tables hold 12 per row. We were in the first row section J-1 because of them being long rows we had to come up with a strategy of how to sit kids so that they would cause the least amount of trouble (again, sorry to the people who got stuck by us!)  The server started us with pepsi (every table seemed to have pepsi, though I think we could have asked for something else, but we were too focused on getting kids settled) and water pitchers that they leave at the table so you can fill your cup as you like. Then Paige and I both had wine which was unlimited, and Paige did an upgrade of $15 for unlimited margaritas, hard lemonade or rum rummer, they said they would bring one every 20 mins which to me didn't feel unlimited, but she got 5 drinks, so she is not complaining!.
Paige and I both loved that our kids could also order off the adult menu, which I had the steak, Paige had the quarter chicken, 2 of my kids had the pulled pork and then the rest had chicken fingers with mac and cheese. 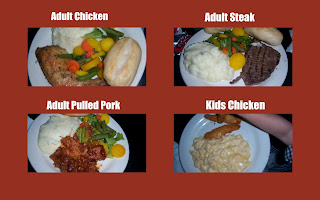 I noticed that when you are not VIP that when you sit down they bring the food out and you eat before the show, where as if you are VIP and doing the pictures with the horses and backstage tour, you kind of end up eating during the show, some might love this, some might not. For me, I missed a good portion of the beginning of the show because I was helping kids get settled with food (mom, ketchup!, Paige, a fork!)

The kids were all very good once they got their food (which was great! I loved my chicken, and the kids were all full and happy) and we watched the show which was amazing, I was surprised that it had such a nice story, about a girl from America that finds out she is a Princess and has to find her Prince (with the help of a genie)
The current featured production at Arabian Nights, The American Princess, is a lighthearted tale of adventure and romance.
On her 21st birthday, an all-American girl and champion rider discovers that she is actually the Princess Scheherazade. Along with her genie Abracadabra, Princess Scheherazade takes the audience on a magical journey around the world to find her prince – who must love horses as much as she does.
You’ll join the princess as Abracadabra takes her to Europe to see the famous military-style quadrilles; to Latin America to see the romance of the garrocha; to a Gypsy camp to see unbelievable acrobatics on horseback; to the world of Imagination to see that beauty of the magical, mystical unicorn; and back to the U.S.A. where four fabulous acts honor America!

I know our oldest kids understood the story but I don't think the younger ones did as much, but they were really excited when the performers did stunts on the horses, one girl jump roped on top of a horse! or the guy jumping through fire! 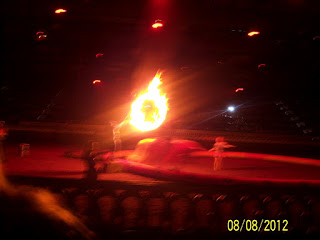 Although Arabian Nights offers unlimited Pepsi-cola soft drinks to guests of all ages, our guests over 21 years of age are invited to purchase one of our two Drink Packages to enjoy unlimited alcoholic beverages. Valid Photo ID is required.

All Entrées are served with dinner rolls and unlimited Pepsi-Cola products. We also include two Drink Packages for those guests over the age of 21 who wish to enjoy unlimited alcoholic beverages.
Our Basic Drink Package is $5, and includes unlimited Budweiser beer and California Blush wine. Our Premium Drink Package is $15 and includes an unlimited selection of Burgundy wine, Chardonnay, Margaritas, Rum Runners, or our House Hard Lemonade. Additional specialty drinks may be purchased a la carte from the bar. All a la carte drinks come in a souvenir cup.
Before the arena opens, our guests are invited to visit our complimentary appetizer buffet in the Great Hall. Once the arena is open, our friendly waitstaff will be waiting to take your entrée order.

On February 29th, 1988, Arabian Nights Dinner Attraction opened for business, fulfilling a dream for Owner and CEO Mark Miller. Bazy Tankersley, Miller’s mother, established  Al-Marah Arabian Horse Farm in 1940, where Miller grew up with a deep love and respect for horses. As an adult, Miller envisioned a place where the world’s greatest horses and riders could come together under one roof.
He wanted to keep the art of Equestrian performance alive, as horses are seen less and less in circuses and other performance venues because of poor footing or other logistics. Since it’s opening, Arabian Nights has become the most honored dinner show in the world, with nearly 9,000 performances. The show is ever-evolving, incorporating new generations and ideas. It is Central Florida’s largest family owned and operated attraction, and has been continually praised for setting and exceeding industry standards in the care and training of its horses. Arabian Nights is also proud to preserve dying equestrian arts, such as bareback acrobatics, training future generations of performers in these spectacular techniques.
Over the years, the show may have grown and the story may have changed, but one thing remains the same: Arabian Nights’ commitment to bringing quality equestrian entertainment to audiences of all ages.


Showtimes are Sunday, Tuesday and Thursday at 6pm and Monday, Wednesday, Friday and Saturday at 8:30pm.

Arabian Nights has generously offered a giveaway of 2 adult and 2 child tickets! Please enter using the rafflecopter form below. US Only please, giveaway ends 8/22/12 at 12:01am


a Rafflecopter giveaway
at 9:33 PM