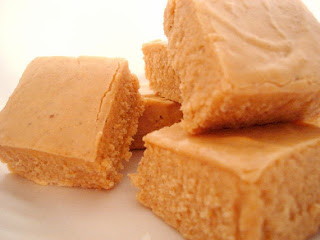 When I saw the Pumpkin Fudge by Jewel of the Lion on Etsy, I immediately contacted the owner of the shop and asked her if she would be up for a review.

When she responded she said she was so busy (I could see why, everything in her shop looks absolutely delicious!) but that she would send me a sampler of the fudge in about a week. 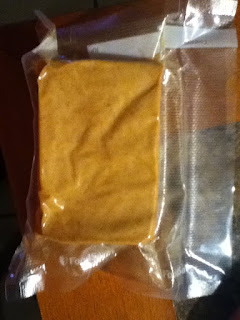 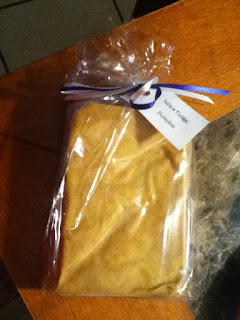 When i got the package a week or so later, I took it out of my mailbox (at that time I had no clue what it was) and it was HEAVY, she mailed it in a small priority box (about the size of a VCR tape...old school, i know)

I took the box inside and opened it up and was SO happy to see my fudge! It was SO pretty wrapped in tissue paper and she vacuum seals each piece individually!

I read her instructions and they said to place the fudge in the freezer or refrigerator for a while because of the heat outside.

I chose to put it in the refrigerator because I knew it would be a while until I could try it since I wanted Casey to be here as well.

Later that night, I couldnt wait :-)

I opened the package and cut off a small piece and took a bite.

The flavor was very good, very much like pumpkin pie only sweeter.

As I stood in the kitchen thinking all my thoughts about this fudge, my husband walked in and took the rest of the piece right out of my hand, not even asking my what it was he popped it into his mouth and chewed..I looked at him, mostly because he does NOT have a sweet tooth, he prefers things that are spicy and the only real sweet he eats is fruit.

I asked him if he liked it and he said "Yeah! where's the rest?"

So I decided to keep the fudge in the refrigerator until Casey could come over and taste it with me. The day she came over I took it out about 4 hours prior to her arrival. Pumpkin is not Casey's thing..it's mine, I would eat pumpkin everything if I could, I just love any flavors of fall.

Casey's initial reaction was good, she said it had good fresh flavors like pumpkin pie, when I tried it, I was MUCH more impressed, it is definitely better at room temperature than cold. Overall, I would think this fudge would be great in the fall, for the summer I would love the Lemon Drop Martini or the Coke Float varieties. With 415 items in her store there is definitely something for everyone, and the fudge prices are VERY reasonable at $10 for 1/2 a pound. 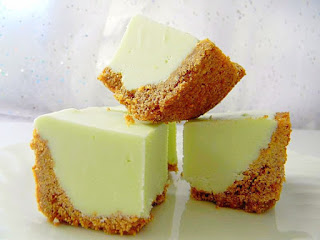 Jewel of the Lion is offering one of my readers a chance to try her "Key Lime Pie" Fudge, enter using the rafflecopter form below, US residesnt only please, giveaway ends 7/14/12