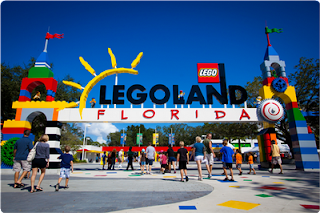 Legoland has finally opened in Winter Haven, Florida. The park is now in what was formerly known as Cypress Gardens. Legoland is about 45 minutes from Disney World. I had a chance to go on a field trip with my sons 1st grade class to Legoland this last month, and this is what i think of it.

I was told that it was not something for little kids, like that my kids who are under 4 wouldn;t be able to go on anything. Well I feel that i wouldn't take anyone over age 15 to the park. The park has 4 major roller coasters which have a height limit of 48" to ride without a adult and 36"-40" to ride with a adult. The coasters are; The Dragon, The Coastersaurus (which is a big wooden coaster), Flying School, (which is a floorless coaster), and finally the Lego Technic Coaster (which is a lot of tight turns). We had the chance to go on all but the Castersaurus. The Flying School, your head gets hit a lot on the sides, the Dragon was ok but short, and the Technic was one to toss you around but the kids all had a blast. 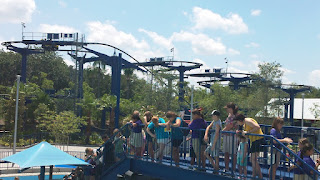 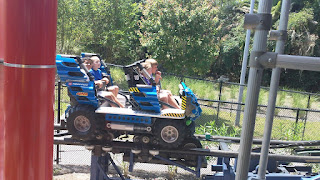 When you first walk in to Legoland you're in all the shops and they have lots of shops to fill your lego dreams! Then, once you get past the shops and go to your right you're in Duplo Village. Duplo Village has a nice set up for little kids up to around 5 years old. They have a huge playground that has blocks and slides to play with it's set up like a giant Duplo barn. In the Duplo Village there are 3 rides; Granny's Jalopies 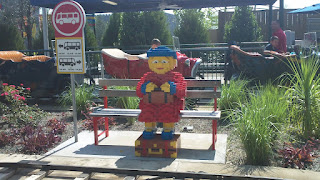 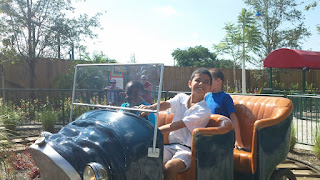 which is a car ride you must be 36" for this ride with a adult. Big Rig Rally is a truck ride which also is 36" with adult or 40" without. 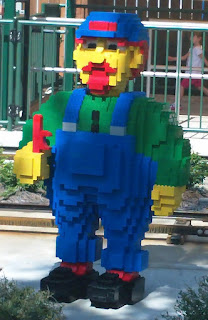 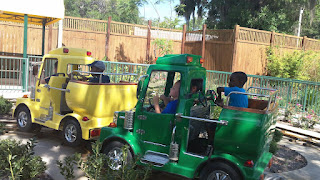 Finally Junior Fire Academy where you spin around a building trying to put out a fire. (the fire is not real its just red lights) this ride also requires you to be 36". 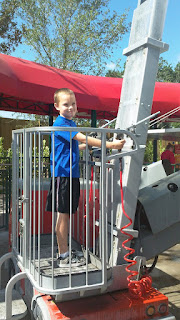 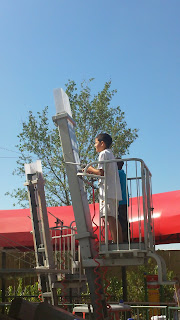 The kids had a blast here even though i felt they were to big for the rides but it was the first thing when entering the park : ) 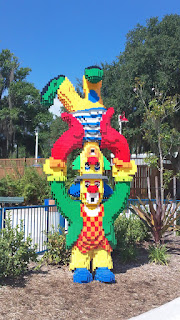 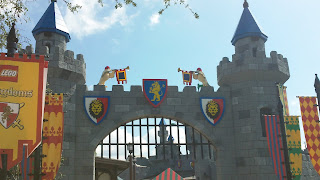 Lego Kingdom is the next thing you find while still going right after Duplo Village. This land offers 4 rides and your first coaster; The Dragon! We started at The Dragon, the wait was long about 45 minutes to an hour which I found out they do not have wait times at the rides so you do not know how long you will be there. The Dragon was a short coaster about a minute in time from getting on and off, all the rides have cubbies so you can place your items down with out a charge. 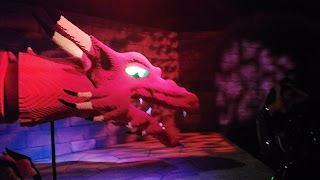 The Kingdom also offers: Royal Joust which you must be 4-12 years of age, we didn't do this it looks like one of those quarter rides at mall but bigger scale going around. Cute, but cheesy. 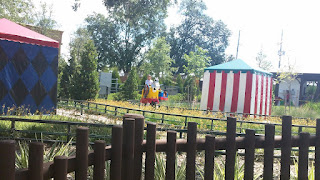 The Forestmen's Hideout is a huge play area for the young and old. It was nice because there was only one way in and out so I just sat while the kids ran all over, it was shaded as well. 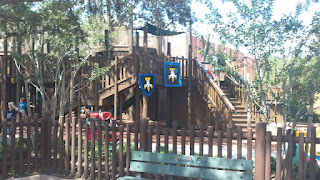 Merlin's Challenge we weren't able to do this but it did look fun it is a big spinning ride were you sit in a train like car and spin super fast. The Kingdom also has a burger place and shop. 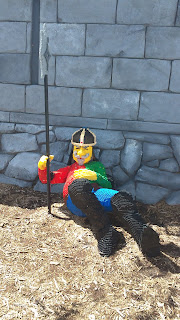 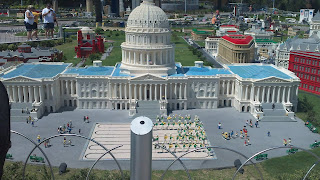 Miniland USA: this is dead center of Legoland. It has no shade at all, and there is a lot to look at. I was blinded by the sun so i didn't know what pictures i was getting until i got home. In Miniland USA they have a lot of famous buildings and places. Here are a few that almost everyone should be able to relate to. 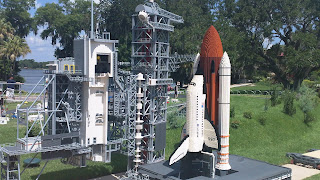 The Statue of Liberty NY 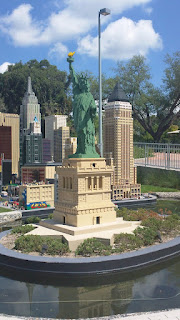 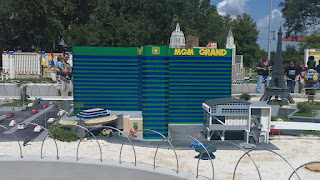 Miniland USA was a very huge place and everything was made of legos they had a lot of buttons to set off effects as well.
Pirates' Cove is a ski and stunt show about 30 minutes long. It was cute, we caught the end of it and were in the wrong area when we watched but the kids laughed and enjoyed. At Pirates' Cove there is also a burger joint.

Lego Technic was probably my favorite of all the areas. It offers the following rides; AQUAZONE Wave Racers, LEGO® TECHNIC™ Coaster, and Technicycle. Aquazone wave racers are jet ski like boats that spin super fast in a huge circle while people on shore have the power to blast water cannons, this was the best ride of the day! The wave racers even lasted a long time for a ride, i didn't want to get off. The height requirements are 40" with a adult and 52" without. 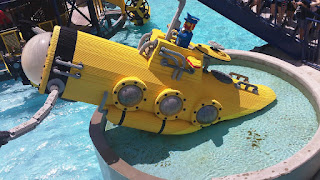 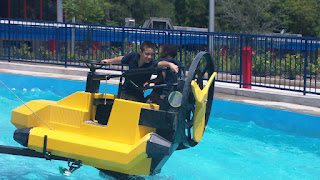 Technicycle was for the smaller kids 36" with adult and 42" without. The ride takes you up a little while you pedal like crazy to get it to go higher or lower. Technic Coaster i already mentioned up there, but it was a fun ride. Lego Technic also offers a sandwich place, a snack shack, and shop.

Wow where to start with Lego City? It has 4 rides, 2 shows and a food place. The rides are 2 Driving schools one is for ages 3-5 and the other is for ages 6-13. I really wanted to do this because there is no track, the kids are able to just sit in a lego car and drive where they want. The Flying School which is the floorless coaster, Boating School this was fun you drive a lego boat and if you get turned around oh well. Our group got split up because of this. We were right behind them but then 3 boats got ahead of us. 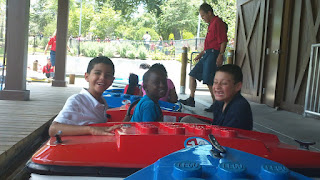 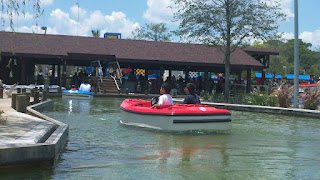 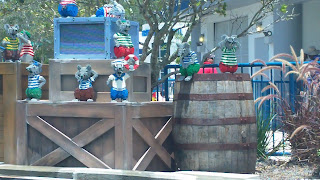 In the lines at Legoland they have a fenced in play area that the kids can go in, where they are able to play with legos while you stand in line I did like the idea of that. Boating School you have to be 34" with an adult and 48" without. Rescue Academy is a show/ride you are in a firetruck that you have to pump to get to one side then jump out get the hose put out fire then jump in and race back to the beginning. My group of kids said it was to much work so they didn't do it, but it was sure fun to watch. Rescue Academy requires that you are 34" with an adult and 48" without. 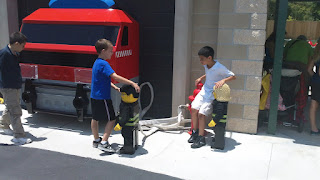 Big Test Live Show is an interactive show that uses acrobatics, music and playful fun to teach fire safety as the zany crew of Fun Town Fire Department attempts to conquer the “Big Test” to become official firefighters. The live show I saw from behind, it looked really neat and funny. Drivin' Drive-In is a hot dog place, City Stage Snack Bar name says it all and of course another shop.

Land of Adventure has 4 rides: Lost Kingdom Adventure the ride, we didn't get to do because i thought it was a show, but it turns out a really fun laser ride where you shot at objects and gain points! Coastersaurus the wooden coaster, Safari Trek is just that you go in a little lego jeep around a course that has lego animals. Height for this ride is 34" with a adult and 48" without. Do not let your kid get out on wrong side of this ride, we had one in our group do that, it was a 10 minute wait for it to start again. Beetle Bounce is a bench that you sit on and takes you 15 feet up as you bounce up and down. Height for this is 36". Pharaoh's Revenge is a huge nerf ball fight they have cannons that you load balls into and aim at others in the fort like structure. Waffle Spears; oh how good that sounds, this was the only food in this section. They are a nice sweet treat on a stick.

In conclusion, I would not recommend Legoland for anyone over 15 years of age, make sure you bring water, sun screen and snacks because its hard to find bathrooms, shade and water fountains. I will say that the drinks were not priced to bad a 20oz soda was $2.50 which is not bad for a theme park, Pepsi is their sponsor so they have all Pepsi products as well as Gatorade (blue or red).

All reviews are my own, i was not paid by Legoland or anyone else to write this review.