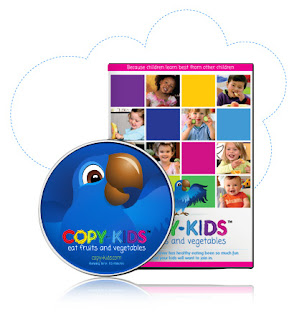 I was offered to review the Copy Kids DVD. When i got the package in the mail i really thought it looked like a great idea, show kids eating fruit (which my kids already love) and vegetables (which my kids are not so crazy about)

As I put the DVD into my laptop to watch it before showing it to the kids, i discovered that each fruit/vegetable has it's own segment, so you don't have to watch the whole thing, or fast forward to whatever you are trying to get your child to eat.

The first segment I picked was "Cucumber"

Honestly, as I watched "Cucumber" I became a little turned off, it shows kids smacking with their mouths open, cucumber juice running down their chins (droll too?) but all the kids seemed to be happy, I decided to try a different segment, so i jumped to "avocado" this was not much better, in fact it was worse, the first scene shows a little girl with a mouthful of green smooshed avocado using her tongue to try to get some off the side of her face.

Just as I was about to turn the DVD off, my 7 year old came over and asked me what I was watching, he is VERY sensitive to watching people eat, he once stopped eating spaghetti for almost 3 months because Aunt Casey told him spaghetti noodles were worms.

I was sure that after watching "cucumber" he would be grossed out, but i let him watch for a second anyway. After the cucumber segment was over I asked him what he thought and he said "Those kids are gross" I agreed.

Later that day we went to the grocery store and down the produce aisle when my son saw the same cucumber as in the video, know what he said? Do you? :-) "mom, can i try it?" I. Was. FLOORED.

"of course!" I said, so after bringing the cucumber home, he asked me to slice it just like in the DVD, which I did, and he ate it! I could not believe he ate it. We are going to watch the rest of the segments as my stomach can allow it, but I am expecting great results.

Copy Kids retails for $19.99 at their website Here and they have offered one of my readers to win their own copy.

Please enter using the rafflecopter form below, us residents only.

Copy-Kids launched in January 2012 with their first DVD — Copy-Kids Eat Fruits and Vegetables. The DVD features twelve 7 minute chapters, one for each of twelve fruits & veggies:

Each chapters features several adorable and entertaining children aged 9 months to 4 years, eating with joy and delight. It’s a simple but revolutionary tool for parents who want their kids to develop a life-long habit of healthy eating.