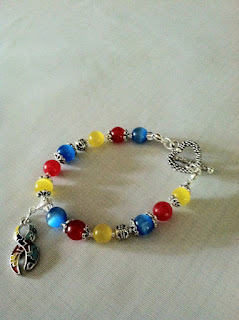 Leslie Zevnik offered me to do a review on her handmade bracelet for autism, I was more then pleased as myself and Paige both have kids affected by this. Leslie has a 9 year old son who also deals with the affects of having autism. I was very pleased to find such a beautiful way to bring more awareness to autism as it's affecting more and more children everyday. 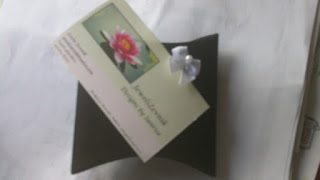 Autism (or ASD) is a wide-spectrum disorder. This means that no two people with autism will have exactly the same symptoms. While experiencing varying combinations of symptoms, some people will have mild symptoms while others will have severe ones.


Empathy - Understanding and being aware of the feelings of others

This is one symptom that really hits home, Paige had lost a pet and her son did not get the fact that the cat passed on, instead he laughed. It's a hard to deal with because of course no one wants someone laughing when they lose someone or thing but you have to breathe and understand that they just don't get it.

When you go to give your child a hug they normally will have open arms and totally embrace the hug. When you have a child with Autism they will pull away, or avoid any kind of contact you offer.

Speech is off when your child says certain words they do not come out correct like my son says okly but he means only, roliey then Riley and so on.

They choose something they LOVE and then make you listen, do, or anything over and over and over until you're so sick of it you want to scream but they haven't had enough. Its something that they only focus on if they want to eat only bananas that will be all you can get them to eat for a week.. nothing but the banana. They do not like change! Its very hard for them to play with other kids because they want to play cars yet the other kids all want to play tag, ball or whatever but your child only wants to play with cars. 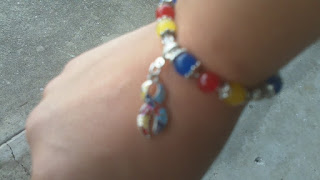 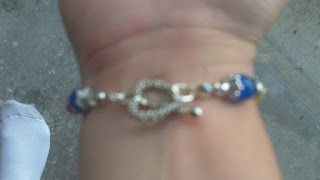 Added by Paige: I love wearing my bracelet because I want to help other parents to realize what causes Autism, my son is on the spectrum from being given ONE vaccination. I am a firm believer in going natural, WHY are we injecting babies with hepatitis and polio at 3 months old?? Most parents I have spoken with don't understand the vaccine does NOT prevent the disease, in fact the most recent breakouts of vaccine related diseases have been in VACCINATED children, if you feed your child a nutrient rich diet, that's all the "vaccine" they need. My oldest son was vaccinated up until he was 14 months old, in that time he had pneumonia twice and an ear infection every other month. The month after i stopped his vaccines he was NEVER ill again. I stopped vaccinating because he got sick after a shot and i googled it and found out that with that particular series of shots 9% of children DIE, I wish my doctor had told me that, i spent the next week in tears begging GOD to keep him alive, and I have never vaccinated since, except with my youngest, when we were in the hospital (He was 9 weeks premature) and I was hemorrhaging they had me sign a bunch of papers for him as I laid on the table, and I signed them, I did not know what they were but one was for his hepatitis shot.


Now that you're more aware of autism, Leslie sent both me and Paige 2 gorgeous bracelets to review. She had makes all her bracelets in all sizes, most common size are 6.5, 7, 7.5. I took the 6.5 which is a nice fit, the backs are pretty easy to clasp its a heart shape with a stick that holds it on. Made with Cat's Eye, Red Jade, czech glass and Tibet Silver. Comes together with a beautiful heart toggle clasp. Fully adorned with a autism awareness ribbon charm. Made with the top brand 49 strand beading wire. In the center of the bracelet she has a charm which is the autism awareness ribbon. She ships through USPS, in a padded envelope along with a felt box and the bracelet wrapped in tissue paper. At JewelsZevnik she also has more designs, as well as a blue version of the autism bracelet. Prices are from: $15 to $30. I am proud to wear it, I make sure and wear it to play areas, and also other areas which a lot of kids are. Its a good conversation starter as it brings attention because the colors are so bright that you cannot help but look. 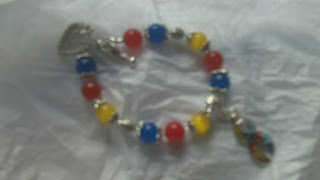 Leslie the owner of JewelsZevnik has offered 2 of these beautiful bracelets as a giveaway they are the 7. size so there will be 2 winners. Enter using the rafflecopter form below, usa only please, giveaway ends 7/9/12 at 12:01 am